In-bond bunker fuel sales edged down in May

China’s bunker fuel sales fell from around 0.15 million (ml) mt to 1.55 million mt in May, according to JLC data. Bunker fuel sales declined slightly when demand was stable to weaker. Some bunkering companies in Guangzhou, Shenzhen and Xiamen have been moved to Zhoushan and other ports in northern China, given the recurrence of Covid-19 cases. Chimbusco and Sinopec sold approximately 620,000 mt and 660,000 mt of bonded bunker fuel, respectively. Bonded bunker fuel oil sales were around 70,000 mt for SinoBunker and 39,000 mt for China ChangJiang Bunker (Sinopec). New companies in the China Pilot Free Trade Zone (Zhejiang) sold 155,800 tons.

Domestic demand for bunker fuel increases in May

Domestic demand for bunker fuel increased slightly from April. There were more inquiries from downstream buyers due to high international crude prices. Rising prices for steel products and freight also boosted demand for shipping. The consumption of end-users of domestic heavy fuel oil was around 370,000 mt in the month, up 40,000 mt from the previous month. Some diesel buyers restocked amid bullish sentiment. Demand for light bunker fuel was 140,000 mt in May, up 10,000 mt from the previous month.

China’s bonded bunker fuel imports stood at 812,400 tonnes in April, down 16.71 percent month-on-month and 21.1 percent year-on-year, according to GAC data.

Chinese imports of bunker fuel fell in April as domestic production of low-sulfur fuel increased. In addition, bonded bunker fuel traders reduced the volume of imports as Sinopec reduced its price of low sulfur fuel, making it lower than Singapore and neighboring countries.

Specifically, the largest source of imports for China was still Malaysia with 567,300 tonnes of bunker fuel. Imports from Singapore, South Korea and Iraq were 90,500 mt, 85,800 mt and 68,800 mt respectively. 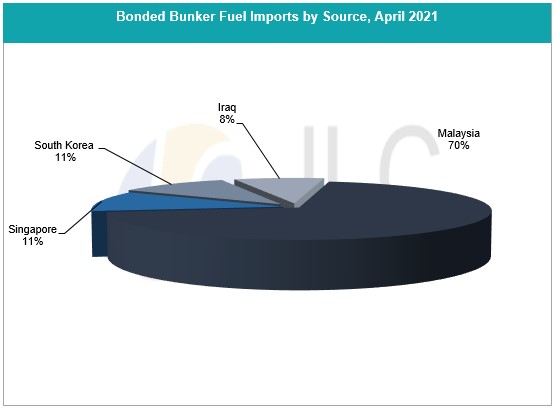 Domestic supply of blended bunker fuels increases in May

Chinese blend producers supplied a total of around 380,000 tonnes of heavy bunker fuel in May, up 30,000 tonnes from April, according to JLC data. The supply of low sulfur residual oil increased in May. The light coal tar and coal-based diesel were mainly brought to the hydrofining field instead of mixing due to their high prices. The supply of shale oil was normal. The supply of heavy bunker fuel has increased thanks to abundant raw materials and stronger demand. Domestic light oil supply was around 150,000 mt in May, up 10,000 mt from the previous month. 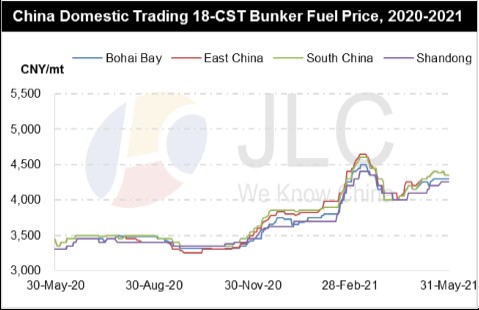 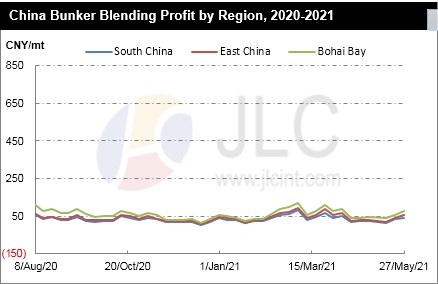 All rights reserved. No part of this publication may be photocopied, reproduced, retransmitted, put on a computer system, or otherwise redistributed without the prior permission of JLC.